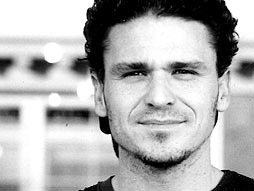 Dave Eggers is an American author, journalist, and editor who is also known for his work in philanthropy. Born in 1970, Eggers was raised in Lake Forest, Illinois before attending the University of Illinois at Urbana-Champaign, where he studied journalism.

Eggers’ studies were interrupted by the loss of both of his parents within a year. His mother died of stomach cancer and his father of lung cancer. The story of how Eggers coped with their deaths while raising his younger brother, then eight years old, is the subject of his acclaimed memoir, A Heartbreaking Work of Staggering Genius.  Soon after being published in 2000, the text became a best-seller and was nominated for the Pulitzer Prize in nonfiction.

In the years since, Eggers has published a total of nine books. What is the What, published in 2006, tells the story of one of the Lost Boys of Sudan. The book was a finalist for National Book Critics Circle Award for Fiction.

In addition to his work as an author, Eggers has played an important role in the development of several independent media sites. Most notably, he founded McSweeney’s, an independent publisher based in San Francisco, which publishes the monthly magazine, The Believer.

Outside of his work as an author and publisher, Eggers has made significant contributions to non-profit organizations that encourage literary education among youth. He co-founded 826 Valencia, a nonprofit that provides writing and tutoring services to children in San Francisco.

A Heartbreaking Work of Staggering Genius, 2000

Your Fathers, Where Are They? And the Prophets, Do They Live Forever? , 2014

2007 National Book Critics Circle Award (Fiction) finalist, What is the What

2012 National Book Award (Fiction) finalist, A Hologram for the King[28]

After the interview, at her desk, Mae scolded herself. What kind of person was she? She was so ashamed. She’d been doing the bare minimum. She disgusted herself and felt for Annie. Surely Annie had been hearing about her deadbeat friend Mae, who took this gift, this coveted job at the Circle — a company that had, at her desperate request, insured her parents! Had saved them from familial catastrophe! — and had been skating through. Damn it, Mae, she thought. Be a person of some value to the world.

Mae looked at the time. It was 6 o’clock. She had plenty of hours to improve, there and then, so she embarked on a flurry of activity, sending 4 zings and 32 comments and 88 smiles. In an hour, her PartiRank rose to 7,288. Breaking 7,000 was more difficult, but by 8, after joining and posting in 11 discussion groups, sending another 12 zings, one of them rated in the top 5,000 globally for that hour, and signing up for 67 more feeds, she’d done it. She was at 6,872, and she turned to her InnerCircle social feed. She was a few hundred posts behind, and she made her way through, replying to 70 or so messages, RSVPing to 11 events on campus, signing nine petitions and providing comments and constructive criticism on four products currently in beta. By 10:16, her rank was 5,342, and again, the plateau — this time at 5,000 — was hard to overcome. She wrote a series of zings about a new Circle service, allowing account holders to know whenever their name was mentioned in any messages sent from anyone else, and one of the zings, her seventh on the subject, caught fire and was rezinged 2,904 times, and this brought her PartiRank up to 3,887.

She felt a profound sense of accomplishment and possibility that was accompanied, in short order, by a near-complete sense of exhaustion. It was almost midnight, and she needed sleep. It was too late to go all the way home, so she checked the dorm availability, reserved one, got her access code, walked across campus and into HomeTown.

When she closed the door to her room, she felt like a fool for not taking advantage of the dorms sooner. The room was immaculate, awash in silver fixtures and blond woods, the floors warm from radiant heat, the sheets and pillowcases so white and crisp they crackled when touched. The mattress, explained a card next to the bed, was organic, made not with springs or foam but instead a new fiber that Mae found was both firmer and more pliant — superior to any bed she’d ever known. She pulled the blanket, cloud-white and full of down, around her.

But she couldn’t sleep. Now, thinking about how much better she could do, she logged on again, this time on her tablet, and pledged to work till 2 in the morning. She was determined to break 3,000. And she did so, though it was 3:19 a.m. when it happened. Finally, her mind aglow but knowing she needed rest, she tucked herself in and turned off the lights.

A Heartbreaking Work of Staggering Genius

I did not know that the last time I saw my father would be the last time I would see my father. He was in intensive care. I had come up from college to visit, but because it had been so soon after his diagnosis, I didn’t make much of it. He was expected to undergo some tests and treatment, get his strength back, and return home in a few days. I had come to the hospital with my mother, Beth, and Toph. The door to my father’s room was closed. We pushed it open, heavy, and inside he was smoking. In intensive care. The windows were closed and the haze was thick, the stench unbelievable, and in the midst of it all was my father, looking happy to see us.

No one talked much. We stayed for maybe ten minutes, huddled on the far side of the room, attempting as best we could to stay away from the smoke. Toph was hiding behind me. Two green lights on the machine next to my father blinked, alternately, on, off, on, off. A red light stayed steady, red.

My father was reclining on the bed, propped against two pillows. His legs were crossed casually, and he had his hands clasped behind his head. He was grinning like he had won the biggest award there ever was.

After a night in the emergency room and after a day in intensive care, she is in a good room, a huge room with huge windows.

“This is the death room,” Beth says. “Look, they give you all this space, room for relatives, room to sleep…”

There is another bed in the room, a big couch that folds out, and we are all in the bed, fully dressed. I forgot to change my pants before we left the house, and the stain from the spill is brown, with black edges. It is late. Mom is asleep. Toph is asleep. The foldout bed is not comfortable. The metal bars under the mattress dig.

A light above her bed is kept on, creating a much-too-dramatic amber halo around her head. A machine behind her bed looks like an accordion, but is light blue. It is vertical and stretches and compresses, making a sucking sound. There is that sound, and the sound of her breathing, and the humming from other machines, and the humming from the heater, and Toph’s breathing, close and constant. Mom’s breaths are desperate, irregular.