I am planning to write and illustrate a children’s book for Herman Melville’s Moby Dick from the perspective of Moby Dick, the whale. I was inspired by class discussions about the shifting perspectives in the narrative, and the question of who the true protagonist is in the story. I also found it interesting that the name of the novel is Moby Dick, but the whale itself fails to physically appear until the last couple of chapters. Most of all, I am interested in the question of how much of Moby Dick’s character is an interpretation imposed by the humans in the story.

I will first need to grapple with the adaptation of the original text into a children’s book. I had initially considered pure condensation of the plot for young audiences, as Allan Drummond does for his picture-book adaptation Moby Dick which does still try to retain Melville’s language as much as possible. There are other adaptations, such as Shirley Bogart’s Moby Dick, and Kathryn Knight’s Moby Dick, which purely centers on creating vivid illustrations on an intimate journey with Ishmael. However, writing from the whale’s perspective allows a much more effective means of communicating musings on the original text that cannot be expressed simply by adapting it as it is. Firstly, focusing on Moby Dick’s perspective covers much of the significant action in the original text, and this plot-driven element will fit quite well with the children’s book genre. Secondly, writing the story of the whale will allow child readers to understand the significance of perspective, which Moby Dick addresses, and also more straightforwardly poses the question of Moby Dick’s true wickedness.

In beginning to flesh out the plot and Moby Dick’s character I have been looking to examples of retold stories of the misunderstood villain, or some sort of backstory to an original text. These have ranged from movies such as Maleficient and Mirror, Mirror, where the backstories of Disney villains humanize them in a way for the audience to sympathize with, to Wicked! the musical, where The Wizard of Oz is retold from the perspective of the witches. The backstory simply adds rather than alters content from the original plot, but manages to give the witch a happy ending – explaining that she has not actually died but has in fact tricked the people remaining in Oz. This particular story also creates an intimacy between the audience and the ‘villain’, who is finally truly understood and has shared his or her secret.

Much more similarly to the project I am pursuing, however, there are several children’s books that present retold stories from the perspective of the ‘villain.’ One of these books included Seriously, Cinderella Is SO Annoying! by Trisha Speed Shaskan, also accompanied with illustrations. This book was interesting in that the stepmother is aware of the fact that we readers have heard the Cinderella story and that she is referred to as a “wicked” stepmother. After this meta moment the stepmother proceeds to recount the whole story from her perspective, where Cinderella is portrayed as a slightly mentally unstable girl who is naturally fast at cleaning. While the book’s rendition of the plot and characters were not as believable, the book also made me realize the importance of the story being another original story complementing the original text without simply being explanations without much plot. Other books included Jon Scieszka’s The True Story of the 3 Little Pigs, where the wolf has sneezing problems and is misunderstood, and Nancy Loewen’s Believe me, Goldilocks Rocks! as told by the Baby Bear, which applies a modern twist and involves Goldilocks being a millennial that takes photos of herself in their home, and notably it is the protagonist that is trying to explain that the ‘villain’ is misunderstood. It is interesting that in all of these stories the characters all directly address the readers as they actively attempt to explain the misunderstandings.

Taking such stories into account, I have compiled the different possible ways I could retell the story from Moby Dick’s perspective:

Aside from the main issue of establishing Moby Dick’s character, there are other points to tackle, such as whether the story will be told in first person, whether the readers will be addressed and the story will have a more explanatory tone, and whether this is more of a precursor story ending where the original story starts or if it covers the original text’s plot too.

As of now as of now I plan to approach the story with a misunderstood Moby Dick who in incapable of properly reading human signals. Examples include having a clumsy whale with reduced sense mistaking Ahab’s leg for food, or living under the strong belief that he is best friends with Ahab and going on a journey to find him. In fact, I would like to play up on the comic element of these misunderstandings, and will look to children’s books such as Peggy Parish’s Amelia Bedelia, or Michele Sobel Spim’s The Know-Nothings, which both play off the comedic quality of misreading or understanding what we consider common sense to people. Aside from pure entertainment value, the dramatic irony will render Moby Dick sympathetically. As a result, the amount of power instilled onto Moby Dick is drastically reduced, thus challenging the interpretations of the whale as a figure for predestination, God, or the impossible in the original text. This portrayal of Moby Dick in a way makes the humans’ plight for revenge seem trivial, and implicitly reveals that it may be the humans themselves who have imposed the symbol of impossibility onto the whale and have created a self-fulfilling prophecy.

I also want to emphasize that while my project is in a sense a adaptation, I do not plan to adjust the original plot points of Moby Dick in any way, whether it be the biting off of Ahab’s leg, the harpoons in Moby Dick from previous hunts, or the death of the crew at the end of the story. However I still wish to somewhat retain the children’s book genre, and will firstly be looking to information pages and articles such as “Do Whales Eat People?” (WhaleFacts.org), “If the Whale Wrote Moby Dick” (Jones), “When whales attack: the horrific truth about Moby-Dick” (Hoare), “The real Moby Dick: Do whales really attack humans?” (Coxon) and “Confused whale nearly sinks whale-watching boat” (Kressmann) for ideas on explaining or justifying these plot points in my story.

Ultimately I am seeking to write a roughly 32-page children’s book that retains its genre as an independent story while providing opportunities to appreciate or reexamine themes regarding human limitations presented in the original novel. Thus I will also be looking to basic guides on writing a children’s book plot, particularly to spend more time on exploring the possible morals to the story – one of the crucial parts of a children’s book.

I believe that the illustrations will be crucial to the story, not simply because this is a children’s book, but also because it will oftentimes tell its own story the text cannot encapsulate. I plan for the illustrations to be necessary to the book, as we see in Amelia Bedelia, when she is told to draw the curtains and we can only tell she is doing the wrong thing by looking at the illustration of her taking out a pencil and pad to sketch the curtains. Similarly, illustrations will be vital to playing out the dichotomy between Moby Dick’s unawareness or misinterpretation of what is actually happening. This can include Moby Dick being playful in the sea while the illustration portrays the ship being destroyed and the lone survivor Ishmael in the corner.

I have firstly been exploring several types of mediums that people have used to represent Moby Dick as shown in Appendix A. Ranging from needle felting, book sculptures or paper popups, traditional inking and patterning, or digital illustrations, different textures and presence or lack of color strongly influence the tone of the book and even its authenticity.

I have been thinking about working either with digital art or watercolor with ink on paper. The truth is that even digitally there are several styles that are possible, and deciding on color schemes – bright or washed out, grayscale or color, also prepares the reader for the mood of the story. The two primary focuses in my illustration experimentation process include the whale and the sea. Moby Dick is a great white sperm whale, and I am planning on staying true to this depiction as much as possible. In order to convey his great size, I may try to frame him so that we do not see his whole body, and I am trying not to make him look as fierce since he is in fact a misunderstood creature in my story. I will be choosing to use color rather than grayscale in order to emphasize the whiteness of Moby Dick.

The second element that I am interested in is the sea as an animated creature. In Moby Dick the sea often seems to have its own personality, and I would like to apply that idea by having the sea be a reflection of the whale or even make it an actual living character. In Appendix B I have demonstrated a couple of different ways to show the way I am exploring water. Water can be fluid, translucent, more solid, moving or still, and the ever-changing state of the water particularly during the buildup at the end of the story will demonstrate the plot changes that the whale maybe unaware of.

One of the worries about this project is that by actualizing the physical manifestation of Moby Dick as a whale, the allegorical implications of the original text is challenged or downplayed. While it downplays the idea that the existence of the whale itself could be a projection or hallucination of the crew, the fact that the whale’s story reveals how his motivations are not what the humans assume does still communicate the issue of the fear and limitation as self-imposed by man. In the long term, another issue could be that such commentary questioning predestination, fate, religion, etc. that come from a knowledge of the original text will go unheeded by the child audience until they later read the original Moby Dick with thorough analysis. Thus while the project does seem apt for children, the more direct moral that the children will take from the book must also be given serious thought.

For technical challenges, I have never written and illustrated a children’s book before so everything will be new to me. While I do not have much experience with laying out illustrations and setting up storyboards beforehand, I believe that with enough time spent the project will be able to be completed successfully. 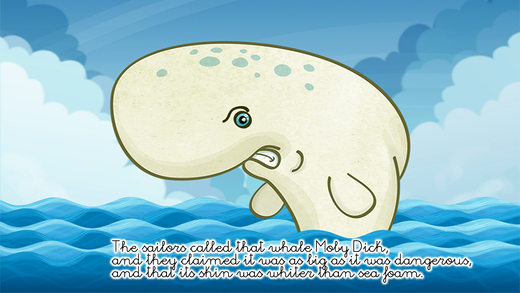 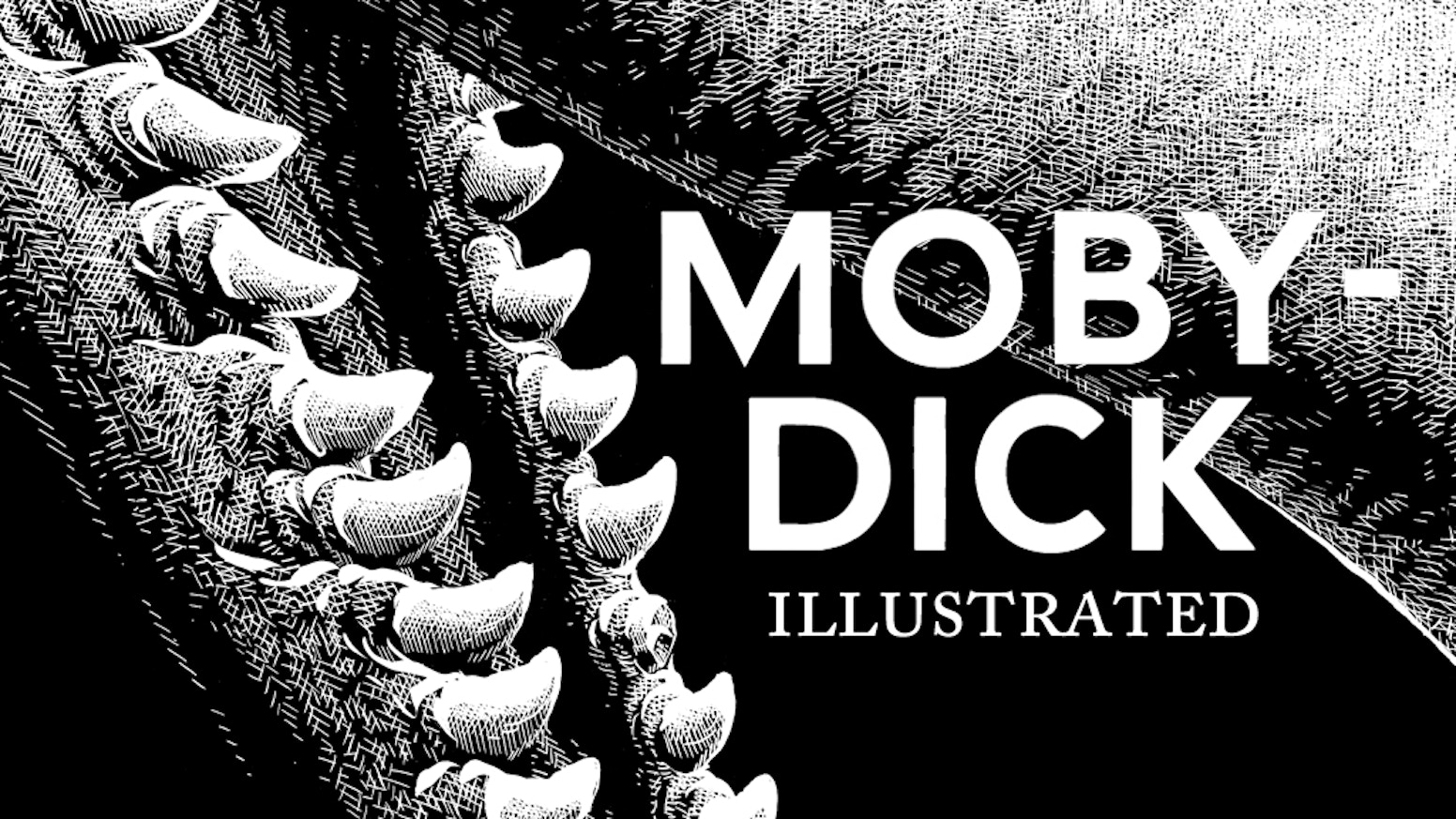 Some rough experimentations of capturing water in different forms